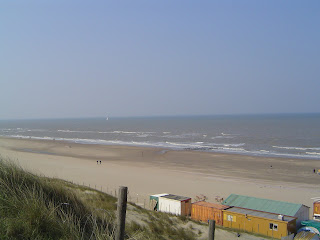 I stepped out of the train station and was almost panicked seeing all the masses of people. I was determined to see the Anne Frank House and was also determined not to be seen as a tourist, so I walked around in circles until I finally relented and pulled out a map.

I found the house and then I saw the line halfway around the building. Even though the sun was starting to set and I wanted to be back on the train by dark, I knew I must stay. I finally reached the front and went inside. It was an eiry feeling knowing that I in the very rooms that 8 people hid from the Germans for years. 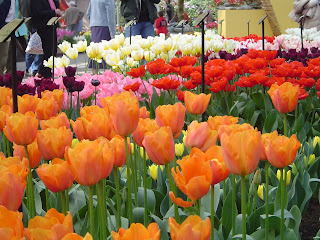 After the tour, I wanted to see the red light district. I walked and walked and walked and nearly gave up until I started seeing sex shops and knew I was in the right place. I walked quickly down the street as it was Saturday night and I could tell the clientel was changing and I was by myself. I then headed back to the train.

Sunday, I spent at Keukenhof with my former supervisor and his family. The flowers were blooming and the weather was perfect as it had been all week long.

Monday, I headed into the office to meet a few people and then toured the Bodies exhibit and ate a quick dinner before heading back to my hotel.
Posted by Courtney at 2:00 PM

Sorry I haven't been around for a while. Great to pop in and see you have been (still are?) travelling. I think it should be compulsory - it makes you appreciate home much better at one level but also puts home in a much better perspective compared to teh world, on another.