Smoochie laid out an outfit for the first day of school days before school started. Note the attention to detail- the headband, lipstick by the collar, necklace and fingernail polish laid out where the hands would be. I did talk her into wearing something a little less formal the first day. 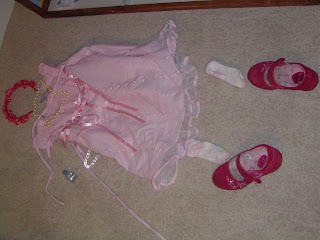 Hubby decided it was a great idea to draw a skull and cross bones on Bubby's back in permanent ink the day before school started. Friends had invited us over for a back to school party. After tattooing their son's back, we probably won't be invited again. 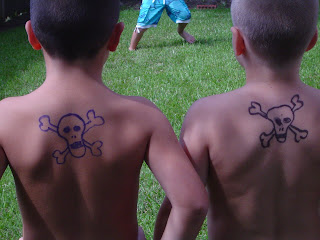 Aren't they sweet when they're not fighting? 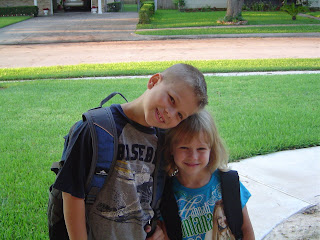 I love this picture of hubby helping Smoochie with her backpack and the school bus in the background. 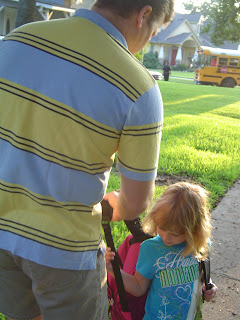 All went smoothly the first day back. Both kids were up and dressed before school even opened. Smoochie went into her classroom, sat down and didn't look back. Hubby had to drag me out of her room. I probably would have stayed all day.

Ahhh, family. So wonderful and yet so irritating at the same time. I am trying not to be completely and totally pizzed off at hubby's brother (W) and sis-in-law (L), but it requires a lot of energy. First, they get into a huge argument with their folks which happened while my father-in-law, who crawls in attics for a living, was helping out late in the evening with an electrical problem at their house. They don't speak for weeks, they ignore father-in-law's birthday and send flowers but don't call for mother-in-law's birthday. I try to overcompensate to make sure they know they are loved.

Then, they are a no show at Bubby's birthday party. No phone call, nothing. Weeks later they show up unannounced to drop off a present for him and also to invite us to my niece's party the next evening. Timing is suspicious.

We attend niece's party and bring invite to Smoochie's party. They happily accept and say they will be there. Halfway through Smoochie's party, L shows up with only one of their three kids. It was a lunch time party at a pizza place and L says they were late because they went to lunch first. Huh?

Smoochie has been begging to see the cousin closest in age (Flower). Flower is one year older. Hubby calls W several times last week. W finally answers phone last night. W insists we not only pick up Flower, but also her younger brother, Fish, because he gets his feelings hurt if Flower goes anywhere without him. Fish is three.

Hubby tells me over and over not to let any of this get to me. Please send zen thoughts my way because this might be a greater task than my capabilities.
Posted by Courtney at 8:20 AM 2 comments:

I love watching the summer Olympics- the swimming, the diving, the gymnastics...I know the television will be on continuously for the next two weeks. The opening ceremony last night was unbelievable. The Chinese went all out. It is also educational for the kids. They are not only exposed to different languages and cultures, but different governments and the impact they have on their citizens. For all of our complaining, we are truly lucky to be born into a democratic society, even will all the flaws.

In other news, the life of leisure for the kids is almost over. School starts two weeks from Monday. The days keep flying by faster and faster. Next Friday we find out who the teachers will be and the following Friday is the open house to meet the teachers. I don't think Smoochie quite understands what she in for, but I know she will adjust quickly. The best part is no driving the kids anywhere in the morning- just walk them a few houses down to the school.

And the best news of all- our tax consultant finally finished and filed our taxes! And still seven days to spare (since he already filed an extension). Considering that we gave him the information the FIRST WEEK IN FEBRUARY, it's about time. Over six months. Ridiculous. Even I could do it in that amount of time.

Gotta run- I hear swimming in the next room...
Posted by Courtney at 1:29 PM No comments: