I apologize for the lack of posting lately. I'm trying to get the house organized and put together before baby comes, because it definitely matters to the baby. I have made quite a bit of progress with the nursery but still feel like I have miles to go on the rest of the house. Hubby is making quite good progress with putting down grass and if the rain would ever stop long enough for the ground to dry out, we might get a fence.
The kids are getting excited and also regressing a bit, especially the girl. She's been clingy and whiney and I have been tired and exhausted and lack any sort of patience these days, which makes it all worse.
Here are some pics that I finally downloaded.
She is fascinated with the spinning of the washing machine. 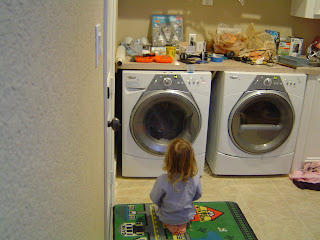 I wonder what she's dreaming about? 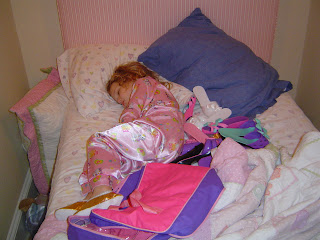 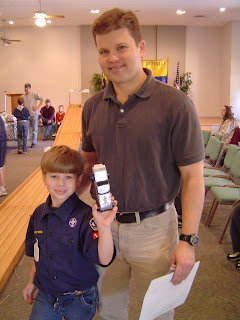 TV issue still not resolved, so right now, it's just a dream... 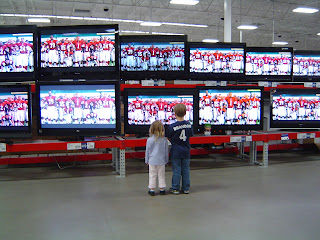 Yes, I am this huge and bloated!! And my friends are too good to me. 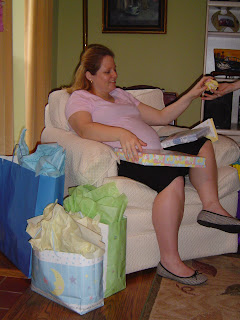 I finally finished the book Raising Your Spirited Child by Mary Sheedy Kurcinka and it was an ephiphany. It has completely changed the way I view my son and and I am slowly working on changing my reactions to include less anger and more empathy. One of the messages in the book is to try to understand why they are acting the way they do and it is not because of defiance or because they are out to get you.

One of the big struggles we had was getting the boy out of bed and moving in the morning. When I looked at it from an angle of understanding, I realized that it takes quite a bit for his father and I to get out of bed and get moving in the morning as well. My routine includes a warm bath and a cup of coffee while hubby prefers a long, hot shower. As a trial, we replaced the boy's evening bath with a morning shower and the results are amazing. He still doesn't bounce out of bed, but 30 minutes of begging, pleading and yelling have been replaced by a five minute warning that the window to take a shower is closing. He is then a happy, agreeable child after the shower. The more subdued morning has spilled into his school day and he goes off to school happy and is now having more good days than bad. All because of a shower!
Posted by Courtney at 8:52 AM 2 comments:

I knew that my mom leaned towards the right on her thoughts and ideas, but I had no idea just how closed minded she was until the other morning. We had a conversation about politics, which I always tried to avoid. I tried to ignore the fact that she called all the candidates by their last name, except for Hillary, which I do find a bit demeaning. Her hatrid for Clinton has long been clear. Not that she's my choice for president and nationalized medicine for all scares the wits out of me after learning about how well Canada's system works, but I do think she deserves the same amount of respect as the others. How much respect politicians deserve is a whole other conversation, but I digress.

I made mention that I was so glad it did not look to be another right wing extremist in the running on the republican side. I stated that I could not take another 8 years of it in office. She mentioned that she liked Bush and that she thinks he did make our country safer. I couldn't disagree more on that point, but when she added that she's terrified because of all the Muslins moving into our country, I nearly flipped my lid. I tried to remain calm as I explained that it is actually a peaceful religion and that radicals exist in every society. I also mentioned the very fact that our country is 'the melting pot' is what made us great. Then she proceeded into a tirade on how difficult it is to work with this nationality or this other nationality. I think she needs some serious diversity and inclusiveness training. Like maybe making friends with some people outside her tiny world. I'm still irritated by it all. Certainly not to say that I don't have my biases and prejudices, we all do, but I do at least try to understand where people come from and understand how cultural differences can affect our interactions.
Posted by Courtney at 3:03 PM 1 comment:

One monkey off my back this weekend. Well, actually two. I went through the 6+ months of boxes stuffed with the 'to be filed' papers and sorted and filed and organized. I hate filing. The even bigger monkey was finishing up the books for both businesses and incorporating all the comments from the bookkeeper and organizing all the data and dropping it off with the tax guy. Whew! I hate tax time.

The next major task at hand I've nicknamed Operation Baby. We need to prepare the nursery, stock up on baby supplies, buy and install infant car seats, pack the bag for the hospital, take the kids on a sibling tour at the hospital and probably the most challenging is to agree on a name.

I've already warned hubby that completing Operation Baby just means that I'll next be on him about finishing up all the little projects around the house. Aren't hormones fun?
Posted by Courtney at 3:39 PM 1 comment: