Memory is the second thing to go, what's the first?

I happened to glance at my last post and noticed I used Smoochie instead of Sudsy. I presume if I can't keep the kid's real names straight, I shouldn't expect to keep their nicknames straight. In fact, it has gotten so bad that I just call them all Boo.

I was telling a coworker about the wonderful benefits of the neti pot and how I rarely ever get sick anymore since I started religiously running salt water through my nose. After that conversation, I was definitely due for Murphy's Law to kick in. I spent the later half of last week and part of the weekend laid on the couch with the worst cold I've had in years. Of course I was home alone with all three kids. I did start feeling better Saturday and Sunday I was back on my feet again.

Sunday evening one of my bestest friends and her family came over to visit. I really, really, really wish she lived in the area, but thankfully they moved about a year ago and are within driving distance, albeit a long drive.

This year I have kicked butt on Christmas presents. After posting last week that I hadn't started, I made a few trips around town, bought a bunch of stuff on amazon and am now nearly finished. I usually waste a lot of time second guessing and watching the sales, but I don't have the time, energy or patience for that this year. Instead I decided to save receipts and if I find a better deal later, I can always take it back. It's really taken the pressure off.

The kids are off from school this week and they spent the entire day yesterday watching home videos. They loved watching themselves and the few that I caught, I noticed that Sudsy has the same facial expressions as Smoochie but looks like Bubby.

Happy Thanksgiving all!!!
Posted by Courtney at 2:26 PM No comments:

I've rewritten the opening sentence to this post three times. Why is it so hard to blog after you've been lazy and not posting? I guess it's the same as not running after training (and completing) a 5K. It gets a little easier every day to just not do it. Sorry Diana!! I need a kick in the butt!

So, Bubby's team one the championship. They played a perfect game and Bubby had several great plays- one being a throw from third base to first to get the guy out at first. The Aggie game was enjoyable. Not the game itself because it was a total blow out, but catching up with friends was nice.

This past weekend was fun as well. Saturday was a surprise party for a friend- her husband totally pulled it off and we were all impressed. Sunday was 'Breakfast Club'. We started this a year ago? maybe longer and we'd get together in the morning because the kids are typically well behaved then and we're no fun since having kids and can't stay up late anymore. They've turned into all day parties. The kids asked if we were spending the night.

Back to the grind at work today. I found out I'm not getting the new position I was angling for, which meant a new boss, which would have been a really, really good thing. I'm disappointed, but it probably works out for the best. Work seems to be drying up for that group so I could have been out of job before I'd even started.

Sudsy is starting to cruise. He pulls himself up and walks if you're holding his hands. We've told him that he's only 8 months old and by all means, please don't hurry to get mobile, but he didn't listen to us. Guess that proves he's our kid after all.

And just to make everyone feel better, I'm not done with my Christmas shopping. In fact, I haven't even started. My goal is to be done by Thanksgiving every year, but that looks less and less possible every day.

I'm getting more and more excited about Obama's presidency every day. I was one of the swing voters until two weeks before the election. I believe he will make a difference and will lead our country in a new, better direction. I'm positive about our future, however I do think it will get worse before it gets better.

Enough randomness for one night.

Update: And by 'swing voter', I was deciding between Obama and throwing my vote away by voting libertarian....
Posted by Courtney at 7:51 PM 1 comment:

Halloween kicked off a weekend filled with activities. Saturday morning, I managed to not only drag myself out of bed, but feed and dress the little ones and pick up my mom to get to a fun run. Friends of mine from the office have become my support and inspiration in the journey to become healthy again. We met our goal of completing the 5K run and Bubby and Smoochie participated in the 1K kids run. 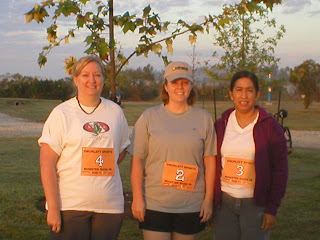 My friend's daughter, who also participated in the kids run, came home with us and we spent the rest of the day playing. They jumped on the trampoline, we went swimming at the pool and then played on the playground at the fast food restaurant after dinner. We had such a busy, active day that Bubby kept insisting it was Sunday.

Sunday afternoon was Bubby's first karate tournament. There is much build up and anticipation for a 45 second spar. He was down 2-0 and then came back to win 2-3. He was so excited that he ran to me yelling 'Mom! I won!' as he tripped and fell flat on his face. Thankfully he wasn't injured although I almost injured myself laughing so hard. Not much rest coming up this weekend either.

Friday night is Bubby's championship game for baseball and Saturday we're heading to College Station to watch the Aggies get slaughtered.

The Gaggle of Kids 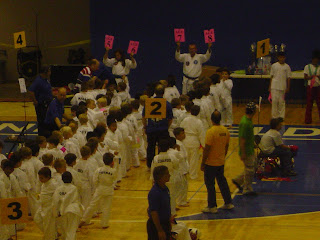 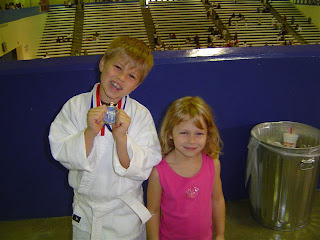 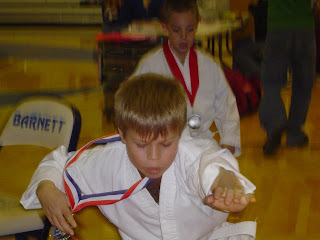 I was amazed and awed by the original costumes I saw last evening- a homemade twister dress and matching game board hat...Dorothy with her new black puppy Toto, unfortunately my kids are never the ones with the original costumes. Heck, people should be lucky I had candy since I waited until the last minute for that also.

Here's the crew from last night: 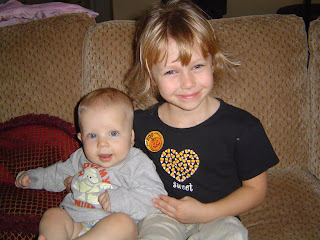 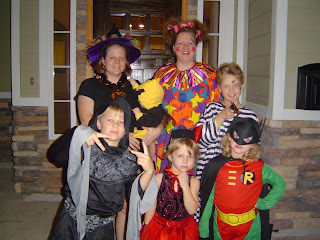 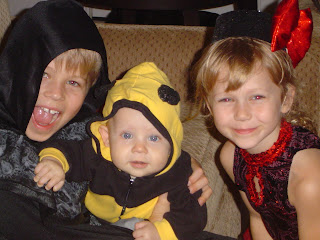 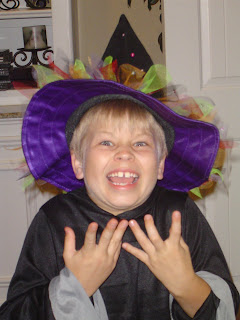