As I complained about before, everything is moving slower than I would have liked. It looked like we still would not have the necessary documents until later this week, but the builder allowed the demo crew to go ahead and move in the big equipment to prepare.
Surprise!!!! I got a phone call yesterday from hubby on his way to pick up the boy from school- the house is gone! There is nothing but a giant Caterpillar sitting on top of a pile of rubble. The girl got really upset when she saw the house and started crying. They tore down our house! Now where are we going to live! Poor thing. We spent half an hour last night explaining how to build a new house, how we will move all her things to the new house, what we will move.
It was a three ring circus yesterday evening with everyone driving by, stopping, mouths gaping open. Apparently there is a general misunderstanding that the neighborhood is historic and you can't tear down the houses. The neighbors were SO INCREDIBLY appreciative to see the house gone. It has been vacant for so long because the house was basically unlivable and patched together so poorly, no one who bought the house could afford to fix it. Well, we took care of it.
In other news, we have a sales contract on our house! No, not the one we are living in and trying to sell. One that we were in the process of refinancing. Now we have to get the tenant to move out. This is the house that has been a thorn in our side for 3.5 years, so we are very happy.
Here's some pics for your amusement. 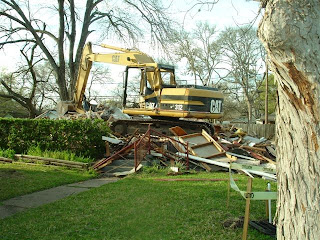 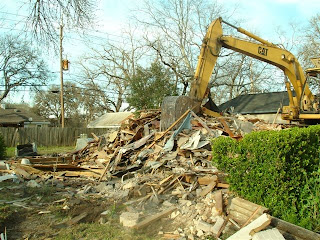 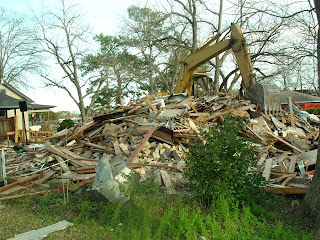